In this article, to consolidate your knowledge and concepts in jQuery, here we've prepared a comprehensive jQuery interview questions and answers guide so you can crush jQuery interview easily.

JQuery is a lightweight, fast, small, and feature-rich JavaScript library created by John Resig. It was released in August 2006 and is free, open-source software that uses a permissive MIT License. During the time of the release of JQuery, Internet Explorer dominated the browser world and Google Chrome was not even in the picture. The different browsers existing then implemented JavaScript in different ways. This led to browser compatibility issues and a tool was required which could fix the potholes of different native JavaScript implementation by different browsers. Thus, JQuery was developed in order to fix this issue by providing a consistent and smooth surface to ease the DOM (Document Object Model) manipulations and perform various animations, AJAX (Asynchronous JavaScript And XML) requests, etc.

Owing to its ease of use, browser compatibility, and neat syntax, JQuery became the favorite front-end tool of developers. In today’s times, Tech giants like Microsoft, Nokia, etc bundle JQuery in their platforms. Microsoft includes JQuery with its famous IDE (Integrated Development Environment) - Visual Studio - for use within Microsoft's ASP.NET AJAX and ASP.NET MVC frameworks while Nokia has integrated it into the Web Run-Time widget development platform. As of May 2019, JQuery was used by a whopping 73% of the ten million most popular websites. A recent study indicates that JQuery is the most widely deployed JavaScript library by a large margin, having at least three to four times more usage than any other JavaScript library like Mootools, Prototype, Scriptaculous, etc.

With its motto of "write less, do more", JQuery has definitely become a very popular tool, with developers all around the globe rolling out hundreds of new plugins and front-end frameworks depending on JQuery. Some of the reasons why a budding front-end developer should learn JQuery are as follows:- 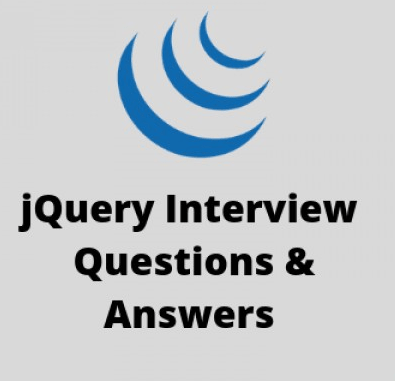 JQuery has made the lives of thousands of developers easy by simplifying the interactions between the DOM and JavaScript and easing the usage of commonly performed JavaScript functionalities that had multiple lines of code into a single line of code. Therefore, any aspiring developer should definitely learn JQuery because it can help him/her in cracking technical interviews as well as in building amazing web applications with ease. In this article we have curated a set of few JQuery interview questions to help people to learn JQuery: -

Q1) What is JQuery AJAX and what does the ajax() method do?

AJAX stands for Asynchronous JavaScript and XML. AJAX is a technology that helps us load and exchange data with the server without a browser page refresh. JQuery provides a rich set of AJAX methods that helps developers develop web applications with ease.
The ajax() method in JQuery sends an asynchronous HTTP request to the server.

Q2) What is the advantage of JQuery AJAX methods?

A few advantages of the JQuery AJAX methods are as follows:-

The load() method of JQuery sends an HTTP request to load the HTML elements or text contents from the server and adds them to the DOM elements.

Q4) What are JQuery AJAX events?

User actions on a webpage are called events and responding to those events is called event handling. JQuery provides simple methods for attaching event handlers to selected elements. The JQuery library also provides events that are fired based on the AJAX request state. These events are known as JQuery AJAX events.

Q5) What is the difference between the AJAX event methods ajaxComplete() and ajaxStart() ?

The ajaxComplete() method is triggered whenever an AJAX request completes and all event handlers attached with the ajaxComplete() method are executed at this time. On the other hand, whenever an AJAX request is about to be sent, JQuery checks whether there are any outstanding AJAX requests or not. If none are in progress, jQuery triggers the ajaxStart() method. Any and all handlers that have been registered with the ajaxStart() method are executed at this time.

Q6) How to change the background image using JQuery?

Q7) What is JQuery connect?

In the given example, we are binding(connecting) function2 of object2 to function1 of object1. So whenever function2 is executed, function1 is also executed.

Q8) What is the advantage of hosting JQuery using a CDN?

CDN is an acronym for Content Delivery Network (or Content Distribution Network). CDN is a large distributed system of servers deployed in multiple data centers across the internet. It can provide the files from servers at a higher bandwidth that leads to faster loading time, enhancing the user experience. Few advantages of using JQuery using a CDN are as follows:-

Q9) What is $() function in the JQuery library?

Explanation: When the Document Object Model (DOM) is ready for the JavaScript code to execute, all the div elements in the DOM will be rendered a background-color of red.

Q10)What is the use of the delay() method in JQuery?

Q11) What is the difference between the find and children methods of JQuery?

Q12) What is the difference between the document.ready() and onload() methods?

Q14 ) What is the difference between the class selector and ID selector in JQuery?

Q15) Explain the functionalities of the empty(), remove() and detach() methods of JQuery.

The functionalities of the empty(), remove() and detach() methods of JQuery are as follows:-

remove(): This method removes the element as well as its child elements. Data from the DOM can be restored. However, event handlers can’t be restored. An example of its usage is as follows:

detach(): The detach() method removes the element and all the associated child elements but retains the data and event handlers of the removed element to be reused later. An example of the usage of the detach() method is as follows:

In order to have a look at more JQuery interview questions and learn JQuery, you can refer to below website.

Q16) What is the difference between Content type and data type in in jQuery ajax?

In Simple words, we can define content type and data type in jQuery Ajax as

Content Type = type of data we are sending to web-service/server, Default is "application/x-www-form-urlencoded; charset=UTF-8", which is fine for most cases, affects the header

Data type = type of data which we expect from web-service/server, it doesn't affect headers.

You can read more about jQuery Content-type and data-type here.

The power and elegance of JQuery are pretty evident by now and therefore, it is advisable to learn JQuery even today. Having JQuery as one of the skills can enhance one’s resume and can also help him/her crack technical interviews of lots of companies. One can download and install JQuery from this site. In order to learn JQuery, it is advisable to know the basics of JavaScript as well. Listed below are links to a few good JQuery tutorials:-