For the most part, legacy cmd commands will run in the PowerShell scripting environment, but several command prompt terminals will not unless you transcribe them correctly. This article will show you how to do it so that you can successfully run cmd commands in PowerShell.

You will learn three ways to run cmd commands in PowerShell in this section. You can use the cmd.exe, the PowerShell invocation operator, or pipe to CMD using PowerShell. Let's get into the details of each method!

Method 1: Use the Invocation Operator

However, the same command will fail to run directly in PowerShell. You will get a blank page as seen below, instead:

To fix this, you need to introduce the invocation operator (ampersand sign) at the beginning of the command line in PowerShell to get:

The invocation operator will help PowerShell to treat the string path as an executable path and give the expected output as seen below: 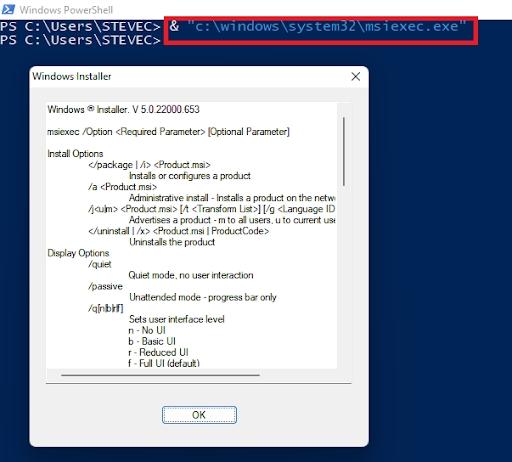 Therefore, you can simply add the ampersand sign “&” to the start of a cmd command line to run it in PowerShell.

Another easy way to run CMD commands in PowerShell is to use cmd.exe. You can do this by adding cmd.exe to the CMD command line within Windows PowerShell. This is similar to the approach in the first method. The only difference is that you are adding a different extension to the start of the cmd command line.

For instance, you cannot run the native cmd.exe command like dir in PowerShell, but you can run it by adding a cmd.exe extension and an additional parameter like \c.

In the example below where you have the command line: cmd.exe /c dir /w, the system will run the cmd.exe /c, and then run the old cmd command "dir" with its argument /w.

The parameter /c will perform whichever command you enter and terminate the cmd.exe command-line interpreter.

You may run the syntax cmd.exe /? to bring up the cmd.exe command’s help documentation for more information on other parameters.

You can also run a cmd command in PowerShell by piping the cmd.

For example, you can pipe the command to query the IP configurations of your local computer by sending it to the CMD command-line interface.

The system will run the code with the command prompt terminal, terminate the terminal, and bring the user back to the PowerShell terminal denoted by Powershell at the start of the line.

Split String into Array in Powershell

If-Else in SQL Server with Example

1899
How to read powershell script file from log parser and save data in sql using c#?
210
How to comment PowerShell code?
118
How to list or display all environment variables using powershell?