If you are new to programming or coding and have just started working on ASP.NET or have started learning C#, you might want to know what .NET framework and about it's architecture. Sometimes you may also want to know about .NET framework because it is required to install some application on your windows.

.NET framework is a software developement framework which is used for building and running application on Windows. .NET framework is developed and designed by Microsoft. A framework usually means a collection of Application Programming Interfaces (APIs) and a shared library of code that developers use while developing any type of application.In the .NET Framework, that library of shared code is named the Framework Class Library (FCL).

So, .NET framework is basically a collection of APIs and libraries which developers use to develop many different type of application like desktop-application or web-application. There are various implementation of .NET framework

.NET Standard is a formal specification of the APIs that are common across .NET implementations. It allows libraries to build against the agreed on set of common APIs, ensuring they can be used in any .NET application—mobile, desktop, IoT, web, or anywhere you write .NET code.

.NET framework is used to develop desktop applications, Web-based applications, and Web services. There is a many programming languages available on the .Net platform, VB.Net and C# being the most common ones.

What is .NET Framework used for? 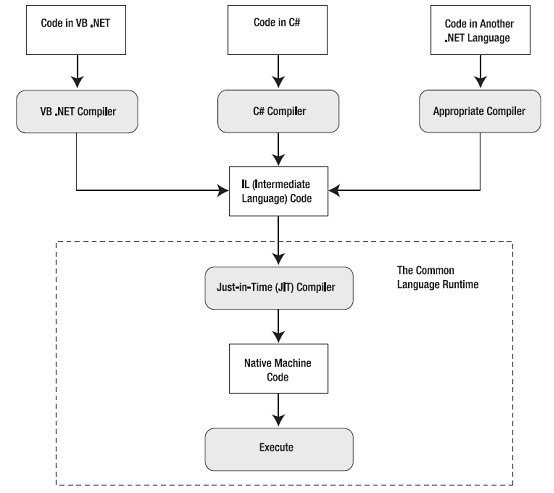 There are two major components of .NET framework:

What is Common language runtime (CLR) in .NET?

All .NET-supported languages can be executed under this single defined runtime layer.

Just-in-time compiler converts the managed code (compiled intermediate language code), into machine instructions which are then executed on the CPU of the computer.

The CLR first locates the referenced assembly, and then it loads it into memory, compiles the associated IL code into platform specific instructions, performs security related checks, and finally executes the code.

.NET FCL is the foundation of classes, interfaces, value types, services and providers that are used to construct .NET Framework desktop and Web-based (i.e., ASP.NET) applications. The fundamental elements of the FCL are defined as classes located in the System namespace.

All of the most primitive aspects of .NET are stored in System, including built-in value types, the Object type, and support for exception handling and garbage collection. Thousands of more classes are located in second- and third-level namespaces that include support for network and file I/O, graphics, security, configuration management, and Web services.

The key rules that you should be aware of are as follows:

If you are new to .NET and looking to learn ASP.NET or C# you can start by learning C#.