Fibonacci Series program in C ( With and Without recursion)

In this article, i have explained about what is fibonacci in C and how to create program for fibonacci series in C, with and without recursion. Let's understand about it and create it's program in C.

Fibonacci series is a series of natural numbers where next number is equivalent to the sum of previous two numbers i.e. fn = fn-1 + fn-2.In fibonacci sequence each item is the sum of the previous two. So, you wrote a recursive algorithm, for example, recursive function example for up to 5

The first two numbers in the Fibonacci sequence are either 1 and 1, or 0 and 1, and each subsequent number is the sum of the previous two numbers.

So for example fibonacci series upto 10 numbers will look like

Let's take a look at it's program.

Program for Fibonacci in C 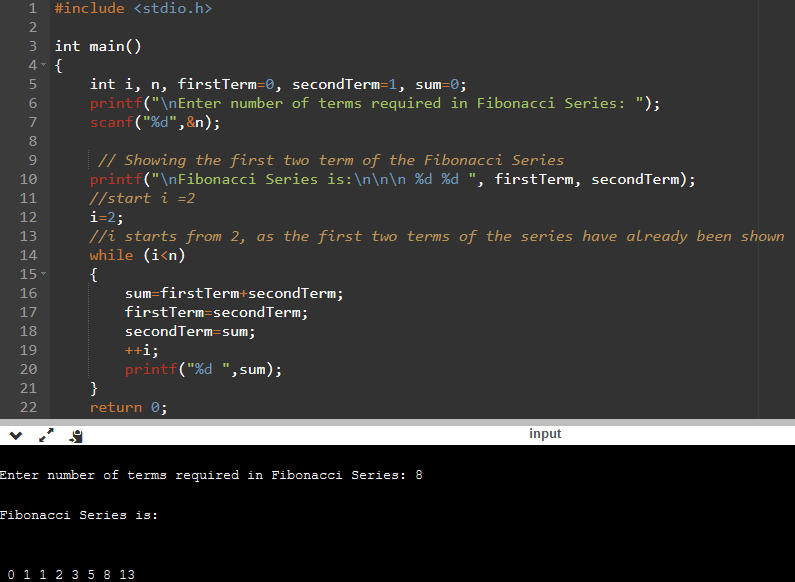 Recursion method is less efficient as it involves function calls which uses stack, also there are chances of stack overflow if function is called frequently for calculating larger Fibonacci numbers.

Program for Matrix multiplication in C (With & Without pointers)

186
How to add windows authentication sql server connection string in Web Config?
49
How to check IIS version in windows server?
36
How can I download complete AWS S3 Bucket Locally?
18
How to remove default dropdown icon from Select list in HTML CSS?