SQL Server utilities interpret GO as a signal that they should send the current batch of Transact-SQL statements to an instance of SQL Server.

A Transact-SQL statement cannot occupy the same line as a GO command.

So, from the above details we can understand that GO statement is used as a Batch separator in SQL Server and used by client tools (like SSMS) to break the entire script up into batches

GO Statement can also be used to execute a batch of T-Sql statements multiple times.

Let us understand GO statement with a few examples: 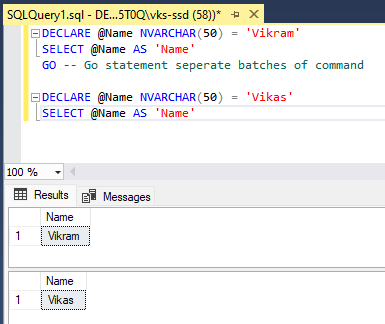 As you can see from the above SQL Query, we have declared 2 @Name but still above query works fine, since, we have seperated Query using "GO" statement, so GO separates the query as batches.

We can take a look at another similar example, in which we will declare a variable before GO statement and then use it after GO statement, it will throw error because GO separates the query.

The above Query will give an error as we cannot use a semicolon(;) as a statement terminator after GO.

Another useful function of GO Statement is that it can be used to execute the same SQL commands multiple times.

As GO statement also has an integer optional parameter, this parameter value signals Sql Server to execute the batch of T-Sql Statement prior to the GO statement being executed for the specified number of times. 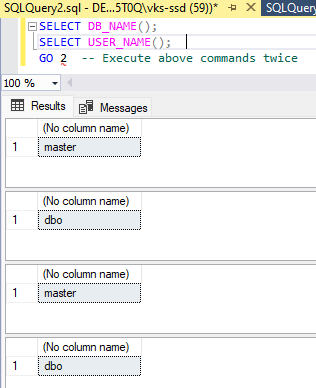 One of the important things to note here is, GO cannot be used inside T-SQL Query, or you can say within Stored Procedure/functions/views etc

So this is not a valid query

If-Else in SQL Server with Example

12235
how to manage shopping cart sessions without login
2555
How to retrieve an int from Stored Procedure and not an objectResult using EF ???
5148
Could not find stored procedure
2518
how to take back up of all sql server databases?
9316
Cannot execute script: Insufficient memory Error in SQL server