Radix sort is a linear sorting algorithm for integers and uses the concept of sorting names in alphabetical order. When we have a list of sorted names, the radix is 26 (or 26 buckets) because there are 26 letters in the English alphabet. So radix sort is also known as bucket sort.

In radix sort, words are first sorted according to the first letter of the name. That is, 26 classes are used to arrange the names, where the first class stores the names that begin with A, the second class contains the names with B, and so on.

After every pass, all the names are collected in order of buckets. That is, first pick up the names in the first bucket that contains the names beginning with A. In the second pass, collect the names from the second bucket, and so on.

When radix sort is used on integers, sorting is done on each of the digits in the number. The sorting procedure proceeds by sorting the least significant to the most significant digit. While sorting the numbers, we have ten buckets, each for one digit (0, 1, 2, …, 9) and the number of passes will depend on the length of the number having the maximum number of digits.

Radix sort can be done into two ways:

LSD is faster than MSD when there is a fixed length. MSD is too slow for small files, and it need huge number of recursive calls on small files.

In the above example you can see, in the first pass, the numbers are sorted according to the digit at two's place.

The numbers are collected bucket by bucket. The new list thus formed is the final sorted result.

To calculate the complexity of radix sort algorithm, assume that there are n numbers that have to be sorted and k is the number of digits in the largest number. In this case, the radix sort algorithm is called a total of k times. The inner loop is executed n times.

Hence, the entire radix sort algorithm takes O(kn) time to execute. When radix sort is applied on a data set of finite size (very small set of numbers), then the algorithm runs in O(n) asymptotic time. 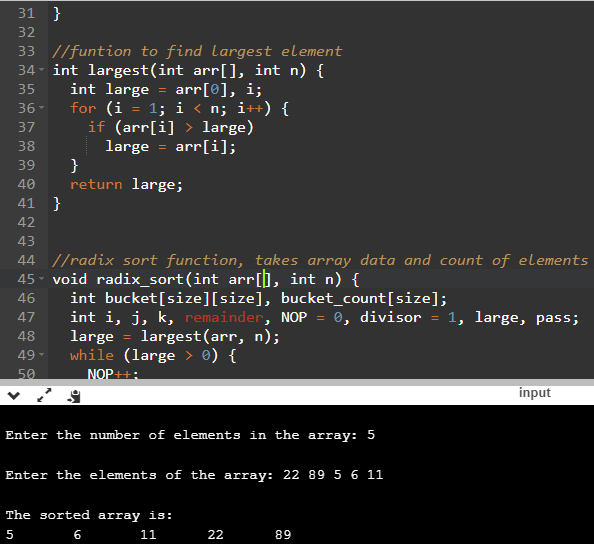 122
Remove last character from string in Python?
74
How to add comments in XML?
127
What is shortcut for expand-collapse sections of code in VS Code?
69
How to escape quotes in json?
54
get location name from latitude and longitude in .net