Union vs Union All in sql server

In previous article, I mentioned Understanding SQL server COALESCE() with example (ISNULL comparison included) but in this article, I have mentioned Union vs Union All in sql server with an example.

UNION and UNION ALL are SQL command just like JOIN, which is used to concatenate 2 or more result sets, but when using UNION command, all the selected columns need to be of the same data type.

The basic difference between UNION and UNION ALL is

So, if use UNION command using above sample tables

I will get country output as below 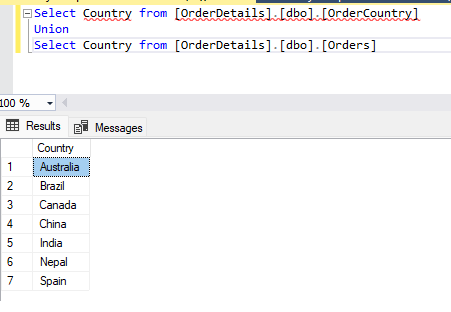 While if I use Union ALL command in SQL Query as below: 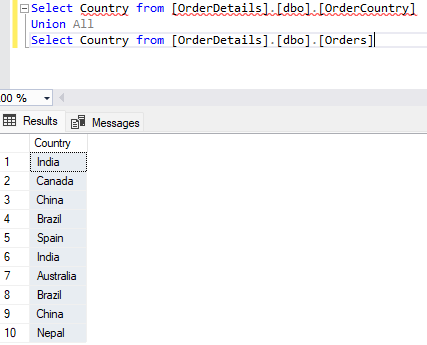 So as you can see from above results.

Union Returns 'Country' name from 2 tables, as sorted and without any duplicates (Distinct)

While Union All Returns all country names from 2 tables, as it just concatenate records, not eliminate duplicates, so it is faster than UNION.

In order to remove duplicates the result set must be sorted, and this may have an impact on the performance of the UNION, depending on the volume of data being sorted.

Get month and year in sql server from date

Get Date From Datetime in SQL Server

12262
how to manage shopping cart sessions without login
2583
How to retrieve an int from Stored Procedure and not an objectResult using EF ???
5164
Could not find stored procedure
2524
how to take back up of all sql server databases?
9370
Cannot execute script: Insufficient memory Error in SQL server