In previous article, I have mentioned SQL Server Management Studio (SSMS) Versions but now in this article, I have provided examples to comment query in SQL, which can be useful for you as a database developer to provide comments in query, so other developer can understand why specific query was written and how it is used or why query was used.

So, comments are used in code to understand the piece of code more clearly to explain the sections of the SQL statements, and it can be also be used to prevent the statements of SQL to execute. 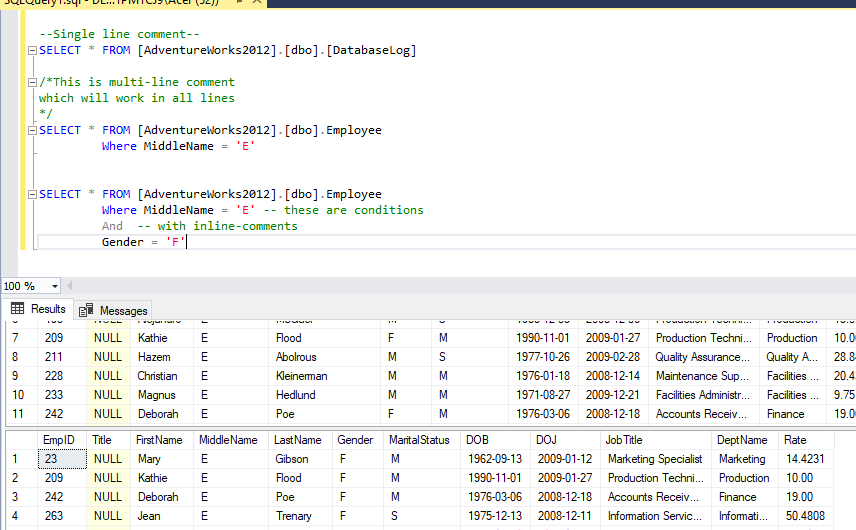 Single line comment in SQL can be done using "--Some text--", basically you need to begin your line with two dashes "–"

Single line comment Syntax is same in MySQL, SQL Server and Oracle database, but in MySQL, you need to keep a space after double dashes, like this "-- this is comment --"

Multi line comments, can be used as inline comments also and syntax remains same for SQL Server, MySQL and Oracle database, it starts with "/*" and follow the comment with an asterisk and forward slash basically ends with "*/".

It is C-style comments.

You can use inline comments using "--" after the query or even using "/* */" whichever works for you,  I have taken example of using two dashes "--" comment after query

and the above examples works perfectly for me in SQL Server.

Or you can also have inline comments as

SQL Comment block is considered when you write comment within a Transact-SQL statement using multiple-line comments which must be indicated by /* and */.

A stylistic convention often used for multiple-line comments is to begin the first line with /*, subsequent lines with **, and end with */.

We have given example of it above here is another example

Commenting text or query in PostgresSQL is same as SQL Server, you can start with "/*" enter text or query and then end it with "*/".

For multi-line comments in MySQL, it can be as below

That's it, hope this article helps you in understanding comments in SQL and how to use them.

If you want you can also change comment shortcut in SQL Server management studio (SSMS), by following these steps:

Query to get all database name in SQL Server?

What is database management system and it's types

Check if table exists then delete it in SQL Server

12459
how to manage shopping cart sessions without login
2685
How to retrieve an int from Stored Procedure and not an objectResult using EF ???
5301
Could not find stored procedure
2579
how to take back up of all sql server databases?
9610
Cannot execute script: Insufficient memory Error in SQL server