Constructors and Desctructors are important part of class in C#, let's discuss each in detail in this tutorial, with example.

Constructor is a special method in C# class, which has same name as it's class name and it is invoked when a object is created.

It is used when we initialize an object of a class. It looks like similar to method but it has the same name as a class.

In the above example, as you can see we have Class of Name "ClassName" and we have method of same name "ClassName()" inside the class, which is constructor.

Let's take a look on more detailed example for constructor

Following are the type of constructors:

It is an special method, which has name as Class name just like constructors, but with tilde(~) sign before class name.

Destructors are used to remove instances of classes as soon as class closed. It is very useful way to clean memory and remove all the instances of the program.

When a Destructor called it automatically invokes Finalize Method. Finalize method in C# is used for cleaning memory from unused objects and instances. So, when you call the destructor, it actually translates into following code. 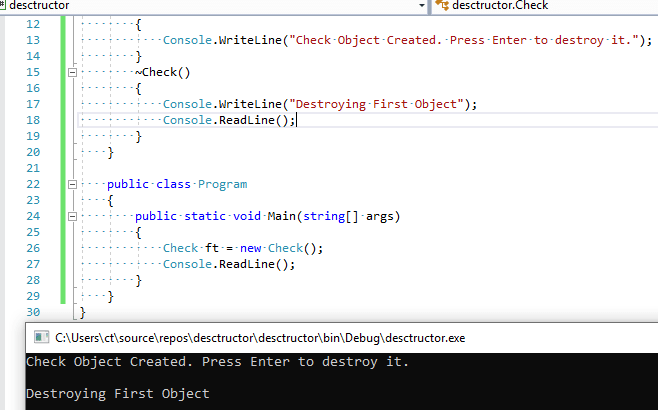