Access Modifiers in C# are keywords which define the scope of accessibility of a member or a type. C# gives us 4 types of access modifiers : private, public, protected and internal. It also allows us to use combination of the above four access modifier to create 2 new access modifiers like protected-internal and private-protected.

The following six accessibility levels can be specified using the access modifiers:

The following image demonstrate the default accessibility applied to a type and which access type is allowed: 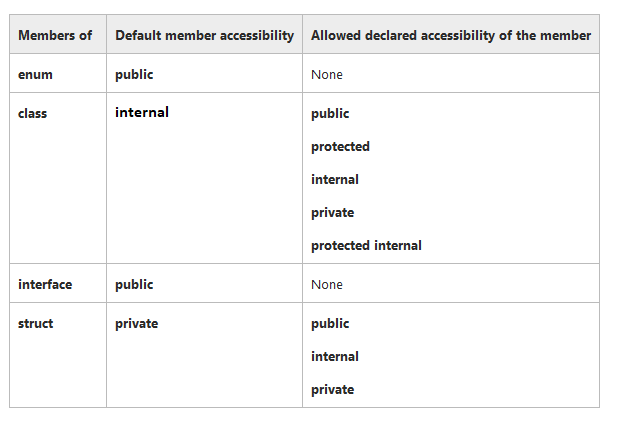 Note: Above image doesn't show private protected , this access specifier can be used by class, but it is avaialble in C# 7.2 and later.

Let's discuss all four access modifiers one by one.

The public keyword is an access modifier for types and type members. Public access is the most permissive access level. There are no restrictions on accessing public members, as in this example:

Take a look at an complete example, where two classes are declared, Test and MainClass. The public members x and y of Test are accessed directly from MainClass.

Private access is the least permissive access level. Members or Objects that implement's private access modifier are accessible only inside a class or a structure. As a result, we can’t access them outside the class they are created, for example:

Nested types in the same body can also access those private members.

If you try to access private memeber from outside the class or struct, you will get compile time error.

A protected member is accessible within its class and by derived class instances. So when "protected" keyword is used with class name, it means, memebers of that class can be accesses by class memebers or memebers of class which inherit it.

In the above example, class DerivedPoint is derived from Point. Therefore, you can access the protected members of the base class directly from the derived class.

If you change the access levels of x and y to private, the compiler will issue the error messages:

Internal types or members are accessible only within files in the same assembly, as in this example:

This is a very useful access modifier when you want to make any object public and yet do want to restrict its access only to the framework that you are coding. So, all internal objects are accessible by all areas of the same assembly.

For example, a framework for building graphical user interfaces could provide Control and Form classes that cooperate by using members with internal access. Since these members are internal, they are not exposed to code that is using the framework.

Let's consider a example, in which we will be using two class, base class have internal member while second class inherits it.

A protected internal member of a base class is accessible from any type within its containing assembly. It is also accessible in a derived class located in another assembly only if the access occurs through a variable of the derived class type.

The private protected access modifier is a combination of the private and protected keywords. We can access members inside the containing class or in a class that derives from a containing class, but only in the same assembly(project). Therefore, if we try to access it from another assembly, we will get an error.

A private protected member of a base class is accessible from derived types in its containing assembly only if the static type of the variable is the derived class type. For example, consider the following code:

As pointed above private protected keyword is avaialble in C# 7.2 and later.