Delegates and events in C#

C# delegates are just like function pointers in C++. In C#, delegate is a reference type data and it holds the reference of a method.The reference can be changed at runtime.

C# Delegate, contains the reference to several methods and call them when needed. So, you create numbers of methods as you need and attach it to delegates. At runtime, an event gets fired and delegates dynamically call the function and show the result.

All the delegates are implicitly derived from System.Delegate class.

Let's consider a delegate example. Suppose, we want to do 2 operations, Add or subtract 2 numbers, then we will create two

If you will notice the above code, we have created one variable "operations" of delegate "DoubleOp" type, by providing the function name, output result changes, as method to be called is decided at runtime by assigning it's value to "operations".

You can run the above code or plat with it using below fiddle.

Delegate can also be multicast delegate.

Refer: Understanding Delegates in C# with examples (with Multicast delegate)

An event in a very simple language is an action or occurrence, such as clicks, key press, mouse movements, or system generated notifications. Application can respond to events when they occur. Events are messages sent by the object to indicate the occurrence of the event. Events are an effective mean of inter-process communication.

The events are declared and raised in a class and associated with the event handlers using delegates within the same class or other classes.

Events are part of a class and the same class is used to publish its events. Events use the publisher and subscriber model. 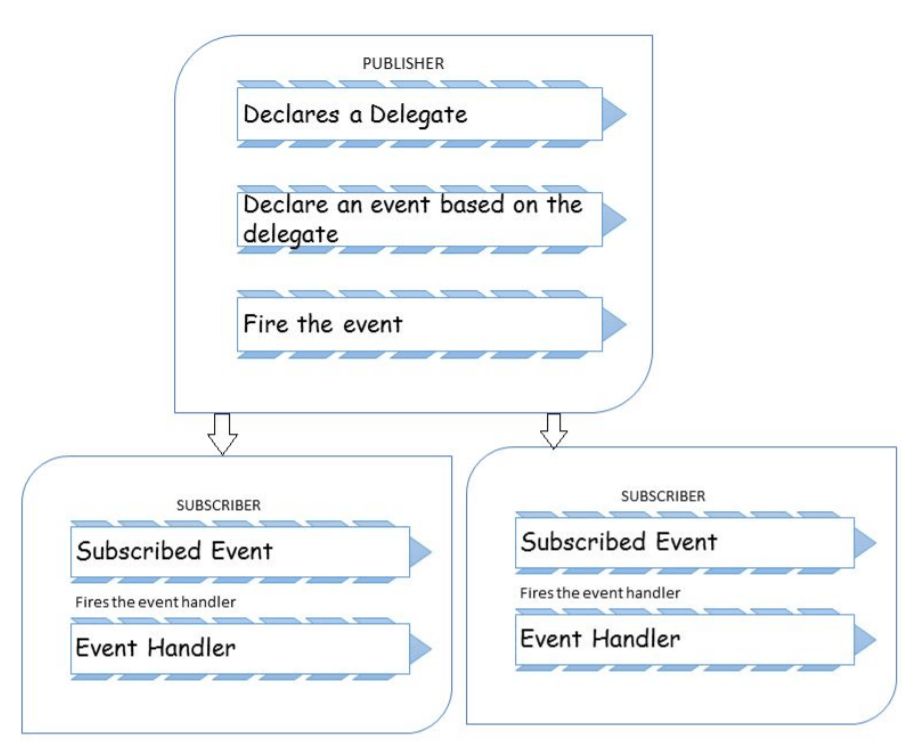 Now, we will use above event-delegate class in our main application, by creating "publisher" class object and then registering OnChange event.

You can try it in below fiddle